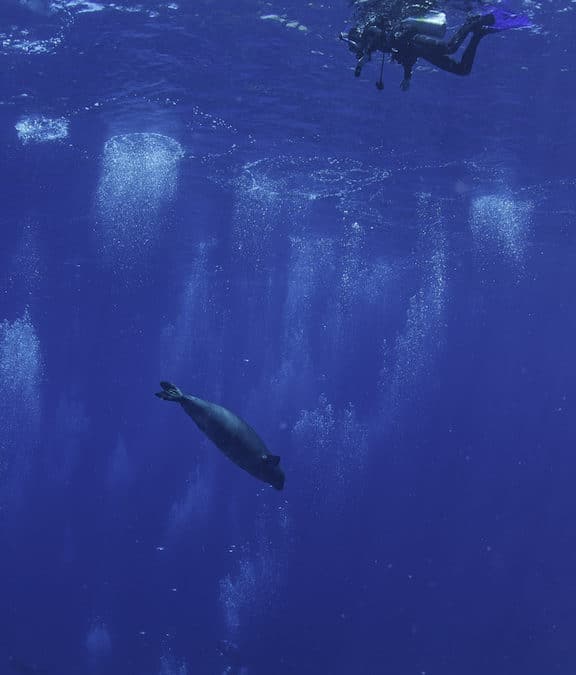 The Hawaiian Monk Seal, or `Ilio-holo-i-ka-uaua, is one of only two surviving species of monk seals in the world today. It is the most endangered marine mammal in the US, and only 1,100 – 1,200 exist; less than 50 seals live in the waters around Kauai. Because they are a protected animal under the Endangered Species Act, it is a federal crime to harass them.

The life span of the monk seal is thought to be around 25-30 years, although this is not certain. Tagging seals for study should provide more information in the future. Adult seals range in size from 400 – 600 pounds, and can reach 6 – 8 feet, with females being slightly larger than males. The seals feed on fish, eels, lobster and octopus.

The seal population is recovering, but two causes of seal death are human disturbance (fishing nets, boat propellers, etc) and tiger sharks. The Kaua`i Monk Seal Watch Program is a volunteer organization that educates the public on respecting the habitat of the seals, especially when they climb up the beach for a nap in the sun. Monk seals should never be approached, and all viewing and photography should be done from a distance. The seals are playful and curious, however, and have been known to approach divers and swimmers.

This photo of a monk seal playing in scuba bubbles was taken with a Nikon D750 with Nauticam underwater housing. 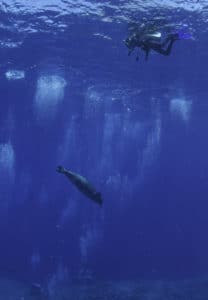 Check out week 5 of the photo challenge. Feel free to leave a comment or share your own photos!