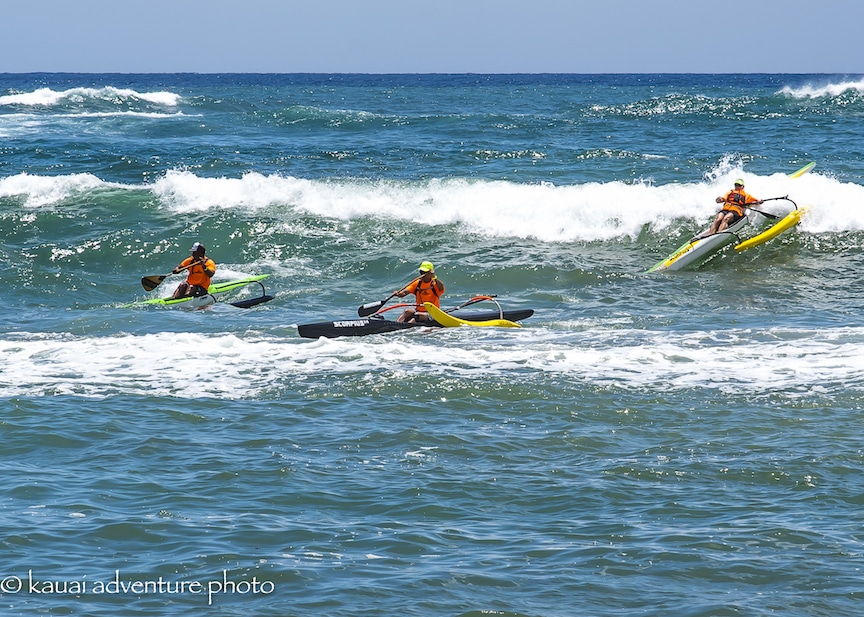 Outrigger paddling is the official state team sport of Hawaii, and provides for some of the most interesting sport photography. Pictures can be taken on land (more exciting when there’s a shore break), from a chase boat, by drone, or while paddling. It’s pretty common to see multiple people with GoPros attached to the iakos of the boats taking video while surfing one-man or six-man. If you don’t paddle, you can see the sport from every perspective, along with the occasional dolphin, whale or turtle if the photographer is not preoccupied by paddling.

The first outrigger canoes were used for voyaging to new lands and were filled with dozens of people, plants, animals and water. The following is taken from the Hawaiian Paddle Sports website because it is a great history and I could not possibly write it any better:

“The harsh terrain of the land, including jagged volcanic lava rock, steep cliffs, howling wind and waves, made it very difficult to transport anything, so outrigger canoes became a necessity for tasks like fishing and transporting goods and people. When native Hawaiians found giant Koa trees on the Big Island, they soon discovered they could build an entire canoe hull from a single piece of wood. While the outrigger canoe has gone through many phases over the last 2,000 years, Hawaiian outrigger canoes specifically remain built for battling conditions in the open ocean and are recognized for their unique shape, design and lack of extra ornamentation or decoration.

Since setting out on the ocean was still a very dangerous and risky task, building a new canoe involved the work and dedication of many people as well as frequent cultural and traditional practices. First, a kahuna, or Hawaiian priest, had to search for the perfect site and tree by following the ‘elepaio, or Hawaiian forest bird, into the forest. Since the ‘elepaio was attracted to rotting Koa wood, if the bird began pecking at the tree, that meant the wood was not solid and the tree would be useless for the strong structure it took to build a canoe. Once finding the perfect tree, the kahuna would then gather the canoe builders and workers, staying throughout the building process to offer prayers and blessings.

Once the tree was transported back to shore, which often required the effort of hundreds of men over several days, the hull was finished in a special halau, or canoe shed. One of the most highly honored members of the ancient Hawaiian society was the canoe carver, or kalai wa’a. Black paint, made from a mixture of plants and charcoal, was then added to the outer layer of the canoe to help keep it waterproof. For the Ali’i, or royalty, hens’ eggs were used to make the paint shiny and glossy. The final act of building the canoe was the sacrifice of a dog and pig, which symbolized the tearing apart of the billows of the ocean and the rooting of the canoe into the open sea, respectively. Noho, or canoe seats, were often named after the paddler instead of the position number, and specialized wood artisans were given the task of making the paddles, all of which were customized for each owner and displayed proudly inside the paddler’s home.”

Paddling today has evolved from using a canoe for voyaging and to transport goods to racing and recreation. The traditional six-man can now be found in ultralight materials, along with the rare koa and more typical fiberglass. Races can be regatta (short distance sprints around buoys), open ocean (6-10 miles) and channel crossings (racing from one island to another). Canoe clubs have taken root in nearly every state and many different countries, with crews from Australia, New Zealand, Japan and Canada flying to Hawaii for major races. Paddling is a sport for every age group, from young keiki and high school, to masters and kapuna.

Beside the six-man teams, one-man and SUP racing has grown over the recent years, instead of being just a way to cross train for six-man season. It is also not unusual to see paddlers fishing from these crafts. If you haven’t tried outrigger paddling, it’s an amazing team sport that not only teaches you skills and strengthens your body, but also provides an opportunity to learn about the traditional Hawaiian culture and the ocean. The 2017 season is almost upon us so sign up for your nearby club; if you’re on the south shore like me, try Kukuiula Outrigger Canoe Club. 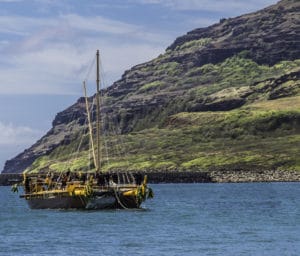 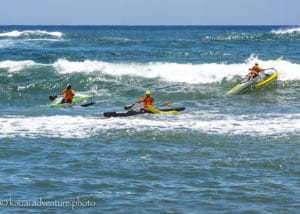 This photo was taken at Salt Pond with a Nikon D750. The paddlers are coming through the break after the final leg of the Kauai World Challenge. 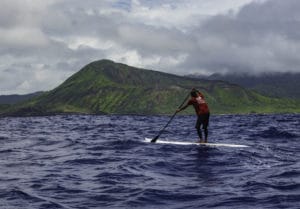 This photo was taken approaching Oahu from Molokai in the SUP race M2O.

If this is your first visit to the Kauai Photo Challenge, it is my way of sharing my pictures of Kauai while learning more about this beautiful island where I live. You are welcome to comment or share your own pictures.

Check out Week 16 of my challenge.

Kauai Adventure Photo is an adventure photo company, providing unique portraits for your stay on Kauai – swimming, hiking, surfing – any adventure you can dream of. Nature photos are available in any size, on canvas, acrylic or metal.

If you’re on Kauai, stop in at Creative Ohana for beautiful prints of the island from Kauai Adventure Photo, along with many other types of local artwork.